I’m late again sharing part two of our South Korea trip, but it is worth the wait, trust me. There are going to be so many pictures in this post, so bear with me.

If anyone is considering a trip to South Korea, do it! Seoul was one of the coolest places I’ve ever been. We saw so many beautiful palaces, ate so much spicy kimchi (and fried chicken), and weaved in and out of the tiny alley ways in Seoul’s many markets. 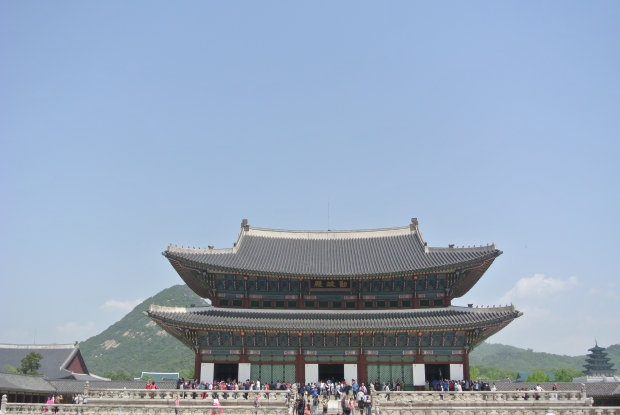 We left Jeju Island on Friday and arrived in Seoul early in the afternoon. Luckily for us, our hostel was in a super convenient location, so we just took the metro over from the airport. We stayed in the Bangrang Hostel near the Chungjeongno station on the purple and green metro lines. It was really great location, just a few metro stops from most of the major attractions. We barely took any cabs at all the whole time.

After we checked in to the hostel, we decided to walk around downtown and explore the Namsan Park area. We stumbled upon the Deoksugung Palace in the middle of downtown and went in to have a look, it was absolutely stunning. We looked around a bit, took tons of selfies, and then walked over to Namsan Park, which is famous for the observation deck on top of the tower in the middle of the park.

We found a really quaint reconstructed village called the Namsangol Hanok Village. It was a really fun area to explore, lots of people were there taking their wedding pictures, the weather was great!

After we explored this village and crashed several couples’ wedding pictures, we walked over to the Namdaemun Market.

There was everything from squid on a stick, to shoes & clothes, to fabrics & furniture being sold in this massive market. It was so crowded and lively, exactly what you would expect a huge market to look like.

We didn’t shop much, just looked around and enjoyed the sights. We also continued on our quest to find the strangest flavor or soda that we possibly could. My personal favorites were peach and watermelon.

There is no better snack food utopia than a South Korean convenience store. They had flavors of Doritos that only the gods could have imagined, including the honey and spicy pepper flavor that almost had me packing my bags and buying a one way ticket to Seoul.

On Friday night we explored another famous shopping district: Myeongdong. This was a little bit more upscale than your traditional market. Lining its alleyways were Forever 21s, American Apparels, and tons of restaurants & street food carts. We had the best time eating our way through the area, and Shiraz got to take tons of amazing pictures. We didn’t stay out too late, because we woke up at an ungodly hour on Saturday morning to see the DMZ, something I’ve always wanted to do!

So we booked a DMZ tour through a company called Cosmojin Tours. You can’t just show up at the DMZ, it is a very controlled area with only a few companies authorized to give tours there. We had a great experience with our tour, which took us to see the 3rd Infiltration Tunnel and the Dorsan Observatory. I could probably write an entire post just on this trip, but I am going to keep it short. Basically, the 3rd Infiltration Tunnel is a tunnel that the North Koreans built to invade the South. There are an estimated 20 tunnels, and only 4 have been discovered. We walked about 200 meters into the tunnel, which was absolutely terrifying for someone  with claustrophobia like me.

Probably my favorite part was the Dorsan Observatory. We were so close to North Korea it was insane. You could see their ridiculous 160 foot tall flag pole with its 400 lb. flag and the propaganda village, it was crazy!

After our trip, we went to the Korean War Memorial in Itaewon (the international district). The memorial outside was beautiful, but the cool part was the 4 story museum in the building behind the memorial. It is the most comprehensive museum about the Korean War in existence, and it was really, really interesting. We explored that for a few hours, took a power nap, and then came back to Itaewon to have a night out. We had heard great things about Seoul’s nightlife, and we were not disappointed. We danced the night away in a club called “Cake Shop” (no cake, sadly) and even chowed down a burger from Korean McDs at about 2:30 a.m. Success.

Sunday was great because we met up with an old friend from my days at St. Andrew Catholic School in SC, Jessy. He lives in Seoul and is getting married to a lovely Korean woman next month! They showed us around Insadong,  which is a super artsy neighborhood. We saw the really beautiful Jogyesa Buddhist Temple, which was covered in paper lanterns of all colors. 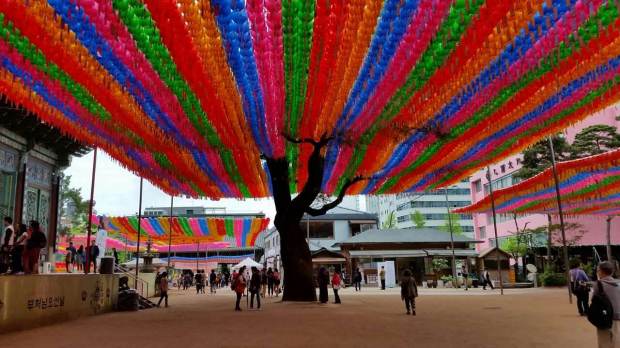 They also took us to Noryangjin Fish Market, wish is the biggest fish market I’ve ever seen. There was stall after stall of vendors selling everything you can think of. Giant tuna, abalone, tiny octopus, giant octopus, sea urchins, you name it, they have it.

We ate some amazing sashimi that had come out of the ocean literally five hours beforehand, it was absolutely delicious. After out foray at the fish market, we headed over to Hongdae, the student/university area that has great nightlife. We went to a little bar called Vinyl that serves their drinks in plastic bags, then trekked over to a hole in the wall Korean BBQ place where we stuffed our faces with some amazing food.

Monday was our last day in Seoul, and we took full advantage of that. We headed to the famous Gyeongbokgung Palace in the morning. It was absolutely stunning! There are mountains in the background, and the sky was bright blue with big white clouds. The palace grounds were huge, and we took tons of pictures all over the place!

We walked over to the Bukchon Village area,  and it was truly one of the coolest places we saw in Korea. It was this village in the hills that had these preserved, old style roofs. There were alleys and hidden areas all through the hills to explore, it was really a great place to spend the afternoon. 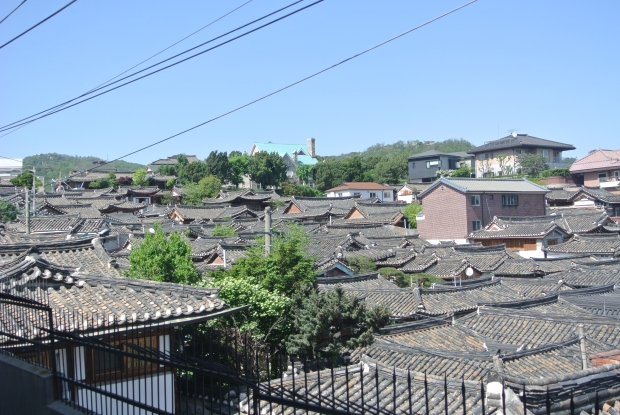 After exploring we chowed down on the craziest (and yummiest) soft serve I’ve had in awhile.

We finally made it to the Changdeokgung Palace, which was my favorite one of the bunch. This was a palace built for a concubine of the Joseon Dynasty and was full of courtyards and private rooms. We took some great pictures, we really lucked out with the weather in Seoul. 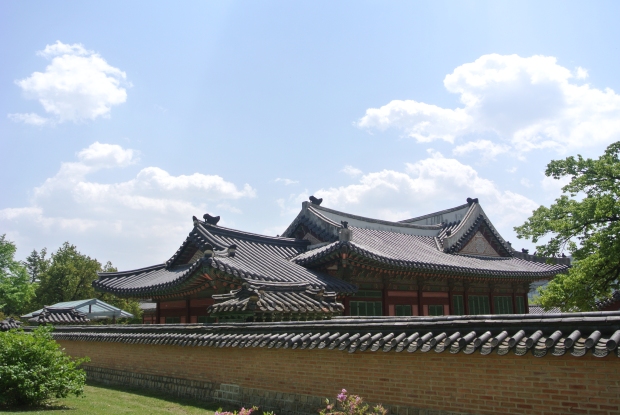 On our last night, we headed back over to Hongdae for a night of drinking Korean college student style. We hit a few bars and clubs, and most importantly, Shiraz got his first taste of the great American institution of Taco Bell. Nothing can come close to Taco Bell at 3 a.m., nothing.

South Korea is an amazing country, I hope I can go back one day and explore some more cities that I didn’t get a chance to on this trip. If you are planning a vacation to Jeju Island or Seoul and need some advice on where to go or how to get around, shoot me an email and I’ll give some recommendations. My main piece of advice is go with plenty of room in your stomach for tons of fried chicken & beer!

There was an error retrieving images from Instagram. An attempt will be remade in a few minutes.

The Latest from Shanghai Spice